Inspired by the wild: nature-loving celebs in sparkling line-up for The Wildlife Trusts’ Big Wild Weekend on 19th-21st June!

Enjoy all the fun of a summer festival experience – at home – with Hampshire and Isle of Wight Wildlife Trust’s first virtual Big Wild Weekend from Friday 19th June to Sunday 21st June.

And, as if that weren’t enough, The Wildlife Trust has put together three activity packets for you to choose from with resources, toolkits, and ideas for how you can take part in the virtual summer extravaganza with your loved ones around you. Need a treat to snack on during the music festival? Or want to decorate your wild space to prepare for the camp out? Choose a booklet that best suit your Big Wild Weekend plans: https://www.hiwwt.org.uk/30-days-wild/big-wild-weekend-activity-booklet

The Big Wild Weekend is part of The Wildlife Trusts’ 30 Days Wild challenge to do something wild every day in June. It looks set to enjoy a huge potential online audience for its selection of artists’ music videos, a live quiz and more, after a record-breaking 650,000 people signed up to take part in 30 Days Wild this year. The weekend comprises: 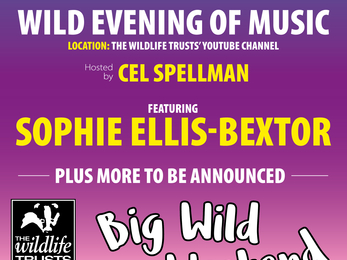 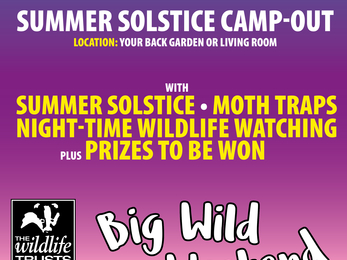 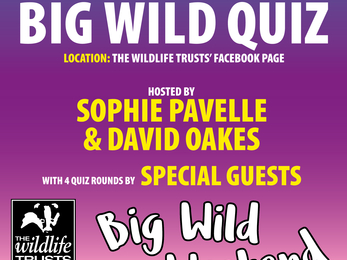 Popular BBC Radio 1 DJ, Cel Spellman, will be the virtual host, introducing an evening of classic upbeat pop, rock and soulful music inspired by the wild. On Friday night – on YouTube – the acts so far, with more to be announced, include:

Catch a pre-recorded set by singer Sophie Ellis-Bextor, including Forever Wild and Murder on the Dancefloor, as she shares her popular lockdown kitchen disco for The Wildlife Trusts.

British singer-songwriter Jack Savoretti, whose songs have been on shows including One Tree Hill, The Vampire Diaries and Grey’s Anatomy, is also set to showcase his music with a film clip at the event.

David Gray showcases his Skomer Live performances made for The Wildlife Trust for South and West Wales. The Babylon singer has written a new song called Running with the waves inspired by childhood holidays on the Welsh island.

Make like a moth on the Saturday and stay up really late for a wild Camp-out night, hosted on Facebook, timed to coincide with the summer solstice and encourage a special connection with nature.  Thousands of Big Wild Weekenders will join in a huge back garden nature party, supported with fun social media posts on Twitter and Facebook. There’ll be an easy ice cream recipe to keep the festival spirit alive, birdsong at the press of a button, plus The Wildlife Trusts’ beautiful moth identification sheets for those feeling adventurous.  Wild Weekenders are also in with a chance to win a fabulous 5-berth family tent from Cotswold Outdoors*. Get creative with a wild festival camp set-up, or an indoor nature-themed den inspired by nature! Additional prizes from Jordans Cereals and Learning Resources UK.

For the full weekend programme and to get involved visit: www.wildlifetrusts.org/big-wild-weekend. Join in on social media with #30DaysWild. Follow @WildlifeTrusts on Twitter and Instagram. The evening of music will be premiered on YouTube, while the Camp-out and Quiz will be hosted over on Facebook.

“The Big Wild Weekend invites thousands of our supporters, volunteers and newfound friends to pitch a tent in their back garden – or create a fun nature-themed den indoors – and celebrate nature with one another. From dazzling music performances and fun quizzes to baking nature themed-treats and doing wild activities, there’s bound to be something for you and your loved ones to enjoy. Everyone is invited to join in the festivities.

We usually host our own events in Hampshire and Isle of Wight for people to come to and take part in the Big Wild Weekend together, but like everyone else at the moment, we’ve transferred all of our activities online. However, we recognise that people still want to do something physical with either their household or social bubble and that’s why we’ve  designed three activity booklets with plenty of ways to mix the online events with things you can very easily do at home. With a record number of 30 Days Wild sign-ups for our Trust, we hope that the knowledge that so many other people are taking part in the Big Wild Weekend at home, will bring just as many people together.’’

Hannah Terrey, Director of Advocacy and Engagement at Hampshire and Isle of Wight Wildlife Trust, says:

“We’re delighted that so many amazing musicians and other celebrities with a passion for nature and wildlife want to get involved with The Big Wild Weekend and support The Wildlife Trusts with their talent and voices. The line-up is still being added to and we’re hoping this free online event will remind everyone how much we’ve valued nature during lockdown and how vital The Wildlife Trusts are in protecting and restoring the natural world. As with many charities, The Wildlife Trusts are facing huge financial pressure due to coronavirus and our heartfelt thanks go out to everyone involved in supporting us.”

Hampshire & Isle of Wight Wildlife Trust are delighted to have secured £45,000 from the Environment Agency to tackle the spread of…

The Wildlife Trusts welcome golden opportunity for beavers to be wild