Dip into the world of dabbling ducks

Winter is a wonderful time to see wildlife, particularly for fans of our feathered friends. As the cold grip of the Arctic winter takes hold on the lakes, pools and marshes of Northern Europe and Russia, huge numbers of swans, ducks and geese retreat to the relative warmth of the UK. Our lakes, rivers, reservoirs and coasts are a winter home for an estimated 2.1 million ducks!

Ducks can be split into two broad groups: dabblers and divers. As the name suggests, diving ducks feed mainly by diving underwater, using their strong feet (and sometimes their wings) to swim. Dabbling ducks, however, feed predominantly at the surface, sometimes even grazing on land. Many dabblers can often be seen upending, with their heads underwater and their bums in the air.

We’ve pulled together an introduction to the dabbling ducks you’re most likely to see this winter, with a quick guide on how to recognise both males and females. So why not wrap up warm, head to your nearest water body and search for some spinning shovelers, whistling wigeon or pristine pintails.

Top tip: a useful way of identifying ducks (especially females) is to look at the speculum – this is a coloured patch on the secondary flight feathers, which are the feathers at the trailing edge of the wing, close to the body. The speculum is often a distinctive colour and can easily be seen in flight, and often seen on swimming or standing birds.

The classic duck. Males have a yellow bill and a green head, separated from the brown breast by a thin white collar. The body is mostly grey, with a black rump. The black middle tail feathers curl upwards. The speculum is dark blue with a white border.

Females are a streaky brown all over. They have a patchy orange and black bill (see gadwall for comparison). Like males, they have a dark blue speculum with broad white borders. This is obvious in flight and can sometimes be seen when the duck is on the water or ground.

Slightly smaller and slimmer than a mallard. Males are mostly grey, with a wavy pattern (known as vermiculations) that is strongest on the breast. They have slightly browner heads, brown feathers on the back and a black rear. The bill is greyish-black and the speculum is small and white.

Females are very similar to female mallards, though slightly smaller and slimmer. The best features to look for are the small white speculum on the wing (much smaller than in male gadwalls) and the bill, which is dark with a neat orange stripe along each side (patchier orange and black in mallard).

Like a slim, elegant mallard, with a long, slender neck and long, pointed tail feathers (not as long as in male). The head is a richer brown than the greyish body, the bill is dark grey and the speculum is bronze-brown with a thick white border at the trailing edge and a narrow white border at the front.

Similar size to a mallard. Males have a glossy green head, a yellow eye and a huge, broad dark bill. The belly and sides are a rich chestnut brown and the breast is white. The speculum is green, with a white border at the front and a large blue patch on the forewing. Shovelers often feed in pairs or groups, spinning around each other.

Resembles a female mallard, but with a huge, broad bill (paler than the male's). The speculum is a dull green (blue in mallard), with a white border at the front and no white on the trailing edge (mallard has a white trailing edge).

Our smallest duck (about 2/3 the size of a mallard). The head is chestnut with a yellow-bordered green patch on each side. The body is grey with a horizontal white line running along it, and a yellow patch either side of the rear. The speculum is bright green.

A very small, streaky brown duck, with a small, dark bill that often has orange towards the base. The speculum is bright green, with a broad white bar in front of it and a narrower one at the trailing edge of the wing.

Smaller than a mallard, with a short neck and small, blue, black-tipped bill. They have a round, chestnut head with a creamy-yellow patch on the forehead. The body is mostly grey, with a white belly, pinkish breast and black rear. The speculum is green with a large white patch in front of it. Often gives a whistling call.

Females are mostly a mottled brown, though the shades can vary from greyish-brown to a richer red-brown. They have a small, round head and short, blue bill with a black tip. The belly is white and the speculum is dark and they lack the large white patch of the male. Often in large groups, grazing.

See them in action

Dive deeper into the world of dabbling ducks with our video identification guide!

Where to see dabbling ducks

The Wildlife Trusts care for many wetland nature reserves across the UK, providing the perfect habitat for our breeding ducks and winter visitors. Here are some of best wild places for dabbling ducks in… 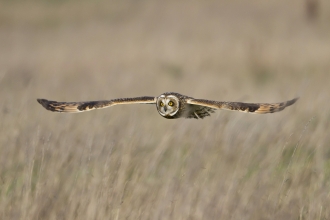 One of our flagship nature reserves and a real wildlife gem

A haven for a wealth of different species 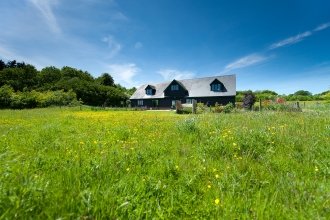 A beautiful nature reserve to visit with the family.

Secrets of the Solent: our first year

As we pass the one-year milestone for our marine project, Secrets of the Solent, we look back at all we have achieved so far.

25 years of the National Lottery

As the National Lottery celebrates its 25th birthday, we look at what their support has enabled us to achieve in the last year.