During 30 Days Wild, we plan to share with you some of the Random Acts of Wildness our staff have done to bring a little more nature into their lives.

Each year the Wildlife Trust’s 30 Day's Wild challenge gains in popularity. Thousands of people take part, celebrating and sharing the ways they have engaged with nature, and their observations about our natural world. But, how have Hampshire & Isle of Wight staff been spending 30 Day's Wild? Company Secretary, Clive Chatters, shares with us his final wild week. Read about Clive's first week here, second here and third here.

Having talked about Fleas in Day 18 there is a madly whirling creature in the corner of our staircase that reminds me of other things in nature that are unwelcome in a domestic setting.

Daddy-long-legs spiders Pholcus phalangioides are the creatures usually responsible for the messy straggle of filamentous webs that you find when its time to spring-clean behind the cupboard. The festoons of web are cartoon-like in being what you’d expect in a ghostly mansion. They also share the skills of the cartoon (or is that graphic novel?) Spiderman in their ability to throw their sticky webs after prey.

Daddy-long-leg spiders share a name with Craneflies as they both have a gangly appearance and an apparent inability to control themselves in times of stress. You know that you’re displacing Pholcus with your dusting as they will vibrate in a hula-fashion as soon as they are threatened. The positive thing about Pholcus is that they hunt down and eat far larger spiders, include those massive hairy-legged House Spiders that seem to head indoors when the weather starts getting cold.

There is a dark corner in the garden where only Ivy will grow. Each year, in June, there is a strange finger-like spike that emerges from the evergreen that has the colouring of old bruises, this is the Ivy Broomrape, a parasite which I introduced into a plant pot some 30 years ago and which has been with me ever since.

Broomrapes are an extraordinary suite of plants as they are entirely parasitic and so have no leaves or any green parts. Many are specialists on their hosts and that is sometimes the easiest way of telling them apart. ‘My’ Ivy Broomrape is the most modest in this suite of photos which include the Tall Broomrape growing on Greater Knapweed and Greater Broomrape that parasitises Gorse.
The scientific name for Broomrape is Orobanche which translates from the Greek as Vetch-strangler. In the Mediterranean there are some Broomrapes that are capable of infesting fields of beans and other legumes; in Britain their spikes of flowers are rarely seen and always admired.

If you are in Winchester and want to see a lurid yellow variety of Ivy Broomrape then it is abundant in the ornamental plantings around the Railway Station and the Public Records Office.

The short nights of the summer equinox mean that you have to take care when timing nocturnal excursions.

If you start searching too early in the twilight then tiny shiny lumps of flint have enough reflective power to give you a false start. Once you see the first glow then you cannot believe that you ever mistook that cold still green for anything else. Glow worms are simply extraordinary, once seen never forgotten.

Glow worms are beetles whose larvae predate snails. This means that they are associated with places where snails abound, which in the text books means chalk grasslands and other places where there is lime available to build shells. In the New Forest the glow worms do like limely places, such as abandoned military installations, but they are also found near to where I live on gravel tracksides, in the grasses of the open heath and even in dry prickly leaf litter under the shade of Holly trees. The key factor seems to be that the vegetation at ground level is short and structurally diverse so that the static glowing females are visible to the unilluminated flying males.

Dusk in the garden and I can still hear the movement of creatures despite the noise from the Totton Western Bypass returning to its pre-lockdown levels. I hope to re-find our Hedgehogs and separate their rustlings from the clumsy antics of Grey Squirrels and Pigeons.

Yesterday evening I heard a familiar rattling buzz following by a crash landing amongst dry leaves. I got to know this sound by watching Stag Beetles emerge from the rotten logs that we have sitting beneath a garden bench. I searched for any sign of Beetles making their clumsy flight; with the Stag Beetle’s body hanging free as its wings beat furiously to keep the creature aloft. A friend once described their inelegant style as ‘Flying like a Transit Van, if a Transit Van could fly’.

I was not in luck yesterday; the Beetle was heard but not seen, maybe I’ll catch sight of them this evening. Fortunately, last year I had a good view of a freshly emerged male climbing up the grasses by our little pond, so today’s photograph is of that splendid creature.

The heatwave of the last few days has mobilised the Black Ants that live in the base of our kitchen wall. Yesterday evening I became concerned that an immature Robin was behaving rather foolishly and leaving itself at risk from the neighbours’ cats. The Robin’s beak was full of silvery drones, winged fertile male ants, that were mustering in preparation for their nuptial flight.

I could not tell if this gathering of Ants was emerging from, or exploring, the access to the cavity wall; they are a species I’d prefer to have as a neighbour rather than as a house-guest. Black Ants are a species with various castes with sterile workers and guard Ants in attendance of the drones. The winged fertile female Ants must have emerged when I was looking elsewhere as when I looked again the drones had vanished into the air in pursuit of the much larger queens. This nuptial column that rose over our home was then accompanied by a suddenly convened flock of seagulls, presumably feasting on the short-lived abundance of insects.

Should they survive the frenzy of feeding and mating, the queens then return to earth where they chew off their wings and return to the subterranean life of laying eggs and instigating the next generation.

On Day 5 I described how my local landscape has its origins in the historical Fletchwood Common which was once part of a much larger New Forest. Fletchwood was enclosed in c.1810 and converted into farmland, about half of which is now built over by the settlements of Ashurst and West Totton. At the time that the fields were made there was no attempt to exclude Forest livestock from the intervening lanes and so the verges were close-cropped in the same was as they still are in nearby Bartley.

After cattle grids were installed in the 1960s there were two residential lanes on the former Fletchwood Common which remained open to livestock. My daily walk took me down these lanes where there are sunny patches of native turf that are exposed to the constant attentions of livestock that wander in from the Forest. Here in the short, parched grasslands are patches of Chamomile, the herb of humility that thrives in such downtrodden places. Continuity of traditional management has allowed this nationally endangered species to maintain a toehold in the shattered remains of Fletchwood Common.

Our garden hedges get a light tidy-up this time of year; they await their full cut until the end of the nesting season. The slow process of trimming with secateurs gives the opportunity to admire the life of the hedge. This weekend we saw, for the first time, a remarkable malformation of oak, a gall created by the tiny wasp Andricus aries. This gall, and presumably the wasp, was first recorded in Britain from Berkshire in 1997 from where it has gone on the colonise the southern counties.

Another arrival this year is Water Bent which is an attractive grass that was once considered a great rarity. I first saw this species about ten years ago when it grew near Totton Station and I’ve followed its progress through the suburbs. Water Bent arrived in our tarmac this spring and started to flower yesterday. Another recent colonist through Totton is a Ramping Fumitory; a straggly muddle of a plant that I first saw a few years ago by the Health Centre and now find throughout my vegetable plot.

Quite what triggers these movements is unclear, but it’s reassuring to know of species that are perfectly capable of taking up opportunities to occupy new ground. 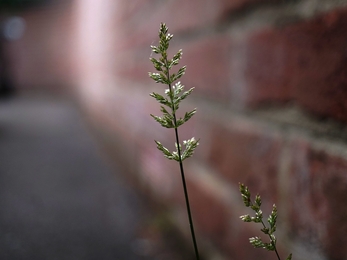 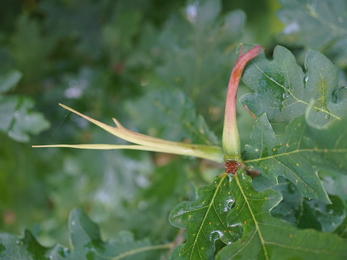 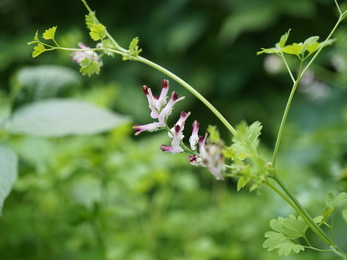 What have the last 30 days taught me? - that there is wildlife everywhere if I have the eyes to see, from the spider in the stair-well, to pavements weeds, garden lawns and out into the countryside. In the words of the poet, all we need is ‘time to stand and stare’; that time has been thrust upon me by way of furlough, a disturbing necessity in troubled times. The last month has been one of heightened awareness of the wonder and fragility of life, of which we are all but a small part.

There is a hollow ring to the oft made claim that wildlife is good for your wellbeing. It is undeniably true but so too is the opposite in that witnessing the abuse of nature is painfully corrosive. There are so many places I could have enjoyed over the last month but chose not to; my world has contracted as our local beauty spots have been loved to death.

The joy of having some knowledge of nature is that you can see the world in a grain of sand. No matter where you are, there is an immeasurable number of other lives being lived-out beside you, mostly indifferent to human presence, always on the lookout for a chance to thrive. Now it is time to return to the fray – it is time to find a better way to live in our wonderful world.

#30DaysWild across Hampshire and the Isle of Wight

We've just completed the UK's biggest national challenge ever this year, #30DaysWild! Over 22,000 people from across our two…

#30DaysWild with the Wildlife Trust Staff

Our jobs centre around nature every single day, but that doesn't stop us from taking part in #30DayWild. Read on to find out what…

During 30 Days Wild, we plan to share with you some of the Random Acts of Wildness our staff have done to bring a little more nature…