https://twitter.com/HantsIWWildlife
https://www.facebook.com/HampshireandIsleofWightWildlifeTrust
https://www.instagram.com/hantsiwwildlife
During 30 Days Wild, we plan to share with you some of the Random Acts of Wildness our staff have done to bring a little more nature into their lives.

Each year the Wildlife Trust’s 30 Day's Wild challenge gains in popularity. Thousands of people take part, celebrating and sharing the ways they have engaged with nature, and their observations about our natural world. But, how have Hampshire & Isle of Wight staff been spending 30 Day's Wild? Company Secretary, Clive Chatters, shares with us his second wild week. Read about Clive's first week here.

Day 8: Change in the Hangers

The East Hampshire Hangers are a ribbon of low hills that lie between Petersfield and Alton; their sinuous scarp has long been admired by naturalists, this is the home ground of Gilbert White (1720‐ 1792) the father of English natural history.

Yesterday was spent with friends in the country above Hawkley. Throughout recent history the Hangers have been an intimate mixture of native woods and flowery grasslands. The proportion of each of these elements has waxed and waned with the economics of farming. If livestock numbers drop then the woods advance into the pastures, but in their turn this phalanx of trees will retreat in the face of resurgent cattle and sheep.

In the few short decades that I’ve known these woods they have changed, almost beyond recognition. The great storms of the 1980s tore out thousands of Beeches which were replaced by a vigorous cohort of Ash. The Ash is now succumbing to die‐back disease which is making space for a re‐assertion of Beech and other native trees.

During the same period the flowery pastures have been in continuous decline. Even in the National Nature Reserve there are once magnificent orchid meadows that are now tumbling down into coarse grasslands and scrub. It is unclear what, if anything, will revive the fortunes of the habitats which provide us with picnic sites and spectacular views along with a home for seasonal beauties such as the Greater Butterfly Orchid (pictured).

There is a line of trees at the bottom of our garden, this borrowed landscape gives us privacy but the downside is ever increasing shade.

I’ve had to abandon growing vegetables along this border and have resorted to Raspberries whose native habitat is open woodland. The canes are now in flower, there’s nothing showy about Raspberries in bloom, just the immodest exposure of reproductive parts without a decorative covering of petals. These open flowers are much appreciated by Bumble Bees, particularly White‐ tailed Bees and the upstart newcomer Bombus hypnorum, the Tree Bumblebee. Tree Bumblebees colonised southern England in 2001 and have moved up country as far as the Western Isles. They have bucked the trend of declining populations of pollinators.

In the cool of the morning there is a tiny moth that dances amongst the Bees, this is the aptly named Fairy Long‐horn whose dipping and diving flight is reminiscent of a Mayfly. The flamboyance of the moth is even more impressive once you see them settle. Their aerial acrobatics are performed whilst balancing enormous antennae which are at least four times the length of their wings. The calm and humidity of the Raspberry bed seem to suite them well, as does the leaf‐mould below the adjacent Birch tree where its caterpillars shield themselves in a cocoon of woody debris.

Yesterday I had the pleasure of visiting some private farmland, just a short way from home. The hay‐ crop had not yet been cut so that every field was draped with a soft pink blanket of Yorkshire Fog.

Each and every meadow on the farm was punctuated by fine Oaks, many of them ancient trees that pre‐date the advent of industrial farming. Over the centuries the character of the trees has been moulded by the use of the land. All of the Oaks are maidens, they have never been cut down low into hedges or pruned above head‐height to create pollards. With plenty of space to grow, the limbs of the unencumbered maidens reach out to form giant domes.

The immense weight of wood and leaf means that some of the largest individuals have developed natural buttresses that reach down to the roots. At the junction of root and soil there are scars that carry the reminders of a time in the not‐too‐distant past when ploughs truncated their spread, the now‐healed wounds bearing the painful growths of arthritic knuckles. Today’s hay‐making is a gentler context for the continued growth of these magnificent giants.

It’s always a pleasure to share encounters with wildlife. My wife’s job takes her into the countryside where yesterday she came, literally, face‐to‐face with a family of Treecreepers. The young had just fledged with tiny bits of fluff still to be shed from their feathers. Adult birds were calling from high branches whilst a youngster sat of the ground, apparently resting after a failed inaugural flight. Fortunately, no predators were about and so the chick was able to climb back up the tree to its parents.

The chick was within an arm’s length and so it was possible to photograph it without disturbing its recovery. Treecreepers have feet that are almost as long as their bodies with the wide span and hooked claws being ideal for running vertically on bark where their plumage provides camouflage amongst the moss and algae. Presumably the chick was still being fed by its parents as it had yet to lose the ‘sad clown’ gape of a nestling. Such encounters provide a delightful response to the domestic pleasantry of “How was your day?”

The view from our kitchen window is of an alley down the side of a concrete garage, it is a challenging spot to keep looking cheerful. Such conditions are the subject to the late Beth Chatto’s book The Dry Garden which is imbued with a deep understanding of the ecological requirements of garden plants.
This year the solution to brightening up our dark passage came by chance rather than study.

A few years ago I tried sowing biannual flowers in the vegetable plot as a late summer catch‐crop, this clever idea resulted in Foxgloves establishing themselves as a persistent weed. To me, one of the defining features of wildlife is that it will do want it wants, irrespective of our plans, our Foxgloves fall into that category.

Last autumn our veg’ plot was not particularly well weeded which left us with a healthy stand of Foxglove rosettes that had bulked up in the fertile soil. This spring those rosettes were lifted and planted into bucket‐sized recycled pots using sieved garden soil, there being no access to potting compost or fancier species. These cumulative acts of chance have resulted in three pots of blooming spires that act as the perfect eyecatcher.

This weekend was spent preparing a great block of text so that it can be submitted to a copy editor who will correct all my failings of punctuation and grammar. I’ve been working on a celebration of Britain’s lowland heaths for the last few years and the volume is now being readied for publication, probably early next year.

Many of the landscape photos for the book have been taken on my travels and so I permitted myself a few moments of sentimentality to remember the vastness of the coastal heaths of Assynt (Sutherland) where the crofting economy sustains its species‐richness, the besieged remains of Prees Heath (Shropshire) which is a marvel in that anything has survived at all, and the watery commons of Dowrog (Pembrokeshire) where over the last 40 years I’ve seen derelict heaths being rehabilitated through the revival of grazing.

There is a balance to be had between writing about nature and actually get out in amongst it. I must do something in the next few days to redress the balance in favour of enjoying reality and escaping the keyboard. 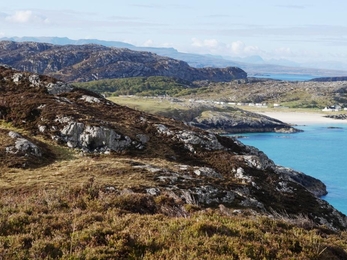 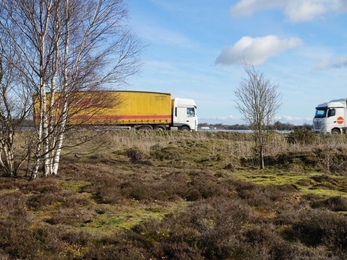 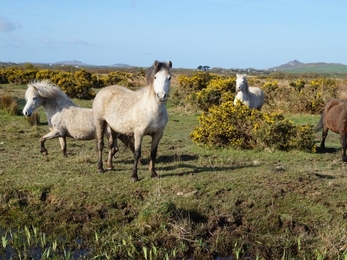 The electric flash of blue as a kingfisher whizzes past can cause a stir at any time of year but, as the colours fade in autumn, these…

There are lots of insects we might associate with autumn rolling in – spiders, crane flies, wasps – but what about ladybirds?

When you head out on a walk or even into the garden, how often do you see some type of wildlife? Almost every time is the likely answer…