https://twitter.com/HantsIWWildlife
https://www.facebook.com/HampshireandIsleofWightWildlifeTrust
https://www.instagram.com/hantsiwwildlife
During 30 Days Wild, we plan to share with you some of the Random Acts of Wildness our staff have done to bring a little more nature into their lives.

Each year the Wildlife Trust’s 30 Day's Wild challenge gains in popularity. Thousands of people take part, celebrating and sharing the ways they have engaged with nature, and their observations about our natural world. But, how have Hampshire & Isle of Wight staff been spending 30 Day's Wild? Company Secretary, Clive Chatters, shares with us his second wild week. Read about Clive's first week here and second here.

According to the plant label I sowed the tray of speedy salad on the 19th March, which seems a lifetime ago. The mixture turned out to be of varied Brassicaceae (cabbage family) which come from all over the world and gave us some interesting ‘cut and come again’ greens at a time when shopping became tricky.

Yesterday I went to re-use the tray and took a few minutes to enjoy the flowers on the bolted crop. Some tiny ichneumon wasps, barely 2mm long, were patrolling the aging salad which was punctured by the grazing of Pollen and Flea Beetles. On closer inspection there were dense masses of grey mealy aphids and the empty egg cases of a Large White butterfly that had been working the garden over the last few days.

Now that first early potatoes are being lifted there is enough bare ground to allow me to sow a succession of greens without having to destroy the community of insects that have taken advantage of my inefficiency. As the caterpillars grow they will probably eat themselves out their home but I hope that they’ll pupate before moving onto the fresher leaves of the salads that I’m now sowing.

Yesterday morning I had the privilege of wandering around a private estate in South Hampshire where the owner has recently restored the fortunes of a bog. Before their destruction in the early nineteenth century the clay country that lies between Romsey and Havant was dominated by great sweeps of heath, bog and pasture woods. In 1836 the naturalist Robert Mudie estimated that these combined commons covered some 16,000 acres (c. 6,500 ha) which is roughly the same area as the Dorset heaths.

Having been released from the shadowlands of secondary woodland, the bog’s Royal Ferns are thriving, with some stems reaching to nearly 2m tall and all of them producing an abundance of fertile fronds. The rejuvenated peatland is now full of young bog-mosses which in time will produce an effective sink for excessive atmospheric carbon.

My host took me to a nearby spot where Broom is in vast abundance. He was delighted that his Broomfield shared the very same name as was used by Anglo-Saxon administrators when they described a boundary which passed that way before the coming of the Normans. Where it is gently farmed, the landscape can exhibit both continuity and change, with ancient traits re-asserting themselves where given the opportunity.

The hedgehogs are back. I was wandering into the garden late on Monday evening to see if there’d be any raspberries for breakfast when I heard the characteristic wet crunch of a snail being devoured. Hedgehogs lack good table manners and their noisy eating makes them easy to find in the ferns at the base of our hedge.

There is something very special about hedgehogs in the garden; they choose you, you must be doing something right if your patch of ground is worth visiting. Our garden is one of the more informal in our road, something which is especially true this year as our neighbours have had lots more time on their hands to primp and mow. Now that I know the hedgehogs are back, I wince at the sound of nearby strimmers. We, and the hedgehogs, are fortunate in that most of the gardens have permeable hedges and there’s the wooded ditch that links us together.

As a child I recall seeing the hedgehog that lived beneath my Grandad’s shed. We were told not to pick them up as they were covered in fleas, which this morning set my mind wandering onto other species with similar associations; which will be the subject of tomorrow’s entry.

The return of hedgehogs to the garden has prompted me to think about Fleas. In the modern age, having fleas in the house is something rather shameful but is inevitable if we enjoy the company of pets. Human Fleas Pulex irritans are now quite a rarity but our ancestors were far more familiar with them.

Before the advent of modern medicines there were apothecaries who were skilled in gathering medicinal herbs, an occupation known as simpling. They concocted remedies using prescriptions that date back to the ancient Greek physician Pedanius Dioscorides which survived our ‘dark ages’ in the libraries of Jundishapur and Baghdad. Aromatic and bitter herbs were used to strew in flea-ridden places in the hope that they’d discourage the pest.

Herbs with such qualities include Small Fleabane Pulicaria vulgaris and Pennyroyal Mentha pulegium, both scientific names containing the element Pul, pertaining to fleas. My good fortune is that there is a green, not far from home, where both of these endangered wildflowers bloom in abundance; their survival in the New Forest is due the commons being intensively grazed by herds of cattle.

Looking back over recent weeks I feel grateful for our garden and appreciate that not everyone is so fortunate in having a greenspace so close to hand. Even if you live in the most urban of settings there’s always the possibility of finding some signs of life. A few years ago I had an hour to lose in Trafalgar Square before a meeting in Whitehall. I wandered around looking at the cracks in the pavement, as one does, and drew up a list of 15 plants, about half of which were native, which seemed an appropriate proportion for somewhere at the heart of a metropolitan city.

We have a wall in the garden that was built from bricks reclaimed for the Old Police Station in Lyndhurst. They are rather lovely handmade bricks and well worth saving from landfill. Unbeknown to us, our bricklayer realised that he was working with imperfect material, including a number of bricks where a cat had walked across the wet clay when it was being dried, sometime in the mid-nineteenth century. Those bricks were reserved and laid to suggest that a cat had scrabbled up the face of the wall. When the sun is low, and the shadows pick out the pawprints, I celebrate the initiative and imagination that goes into the skilled trade of being a bricky.

Having spent last weekend on the keyboard I treated myself to a long drive and an even longer days walk in the Blackdown Hills. At a little less than two hours to the west of Southampton these hills are familiar in their geology ( Greensands and Clay with Flints) but a world apart when it comes to climate.

The valley I chose to visit was recommended by a friend who had read that it was good. Rough grazings line both sides of the central stream with a magnificent sequence of bogs all the way along the springline above which were drier ridges and scree-runs of chert and flint.

The atmosphere was intensely humid which was reflected in the vegetation. A not so great car journey is sufficient to encounter a real change in climate. When expressed as charts and averages these differences look minor, the reality on the ground is undeniable. 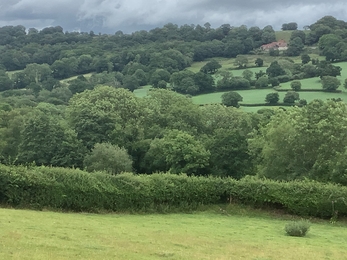 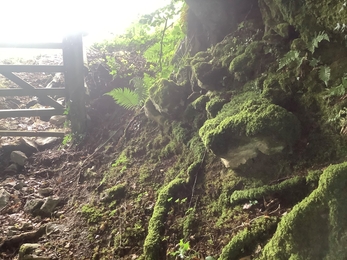 Rock and roots are equally drapped in mosses © Clive Chatters 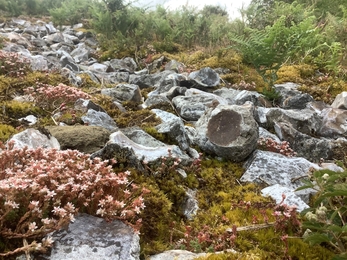 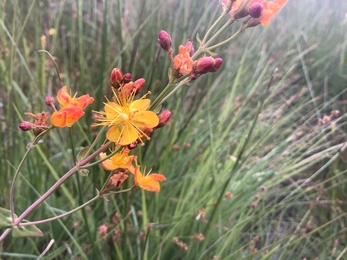 A beautiful St Johns Wort in the bog © Clive Chatters

One of the most exciting things about 30 Days Wild is that it challenges you to look for nature everywhere. By looking more closely at…

#30DaysWild across Hampshire and the Isle of Wight

We've just completed the UK's biggest national challenge ever this year, #30DaysWild! Over 22,000 people from across our two…

#30DaysWild with the Wildlife Trust Staff

Our jobs centre around nature every single day, but that doesn't stop us from taking part in #30DayWild. Read on to find out what…